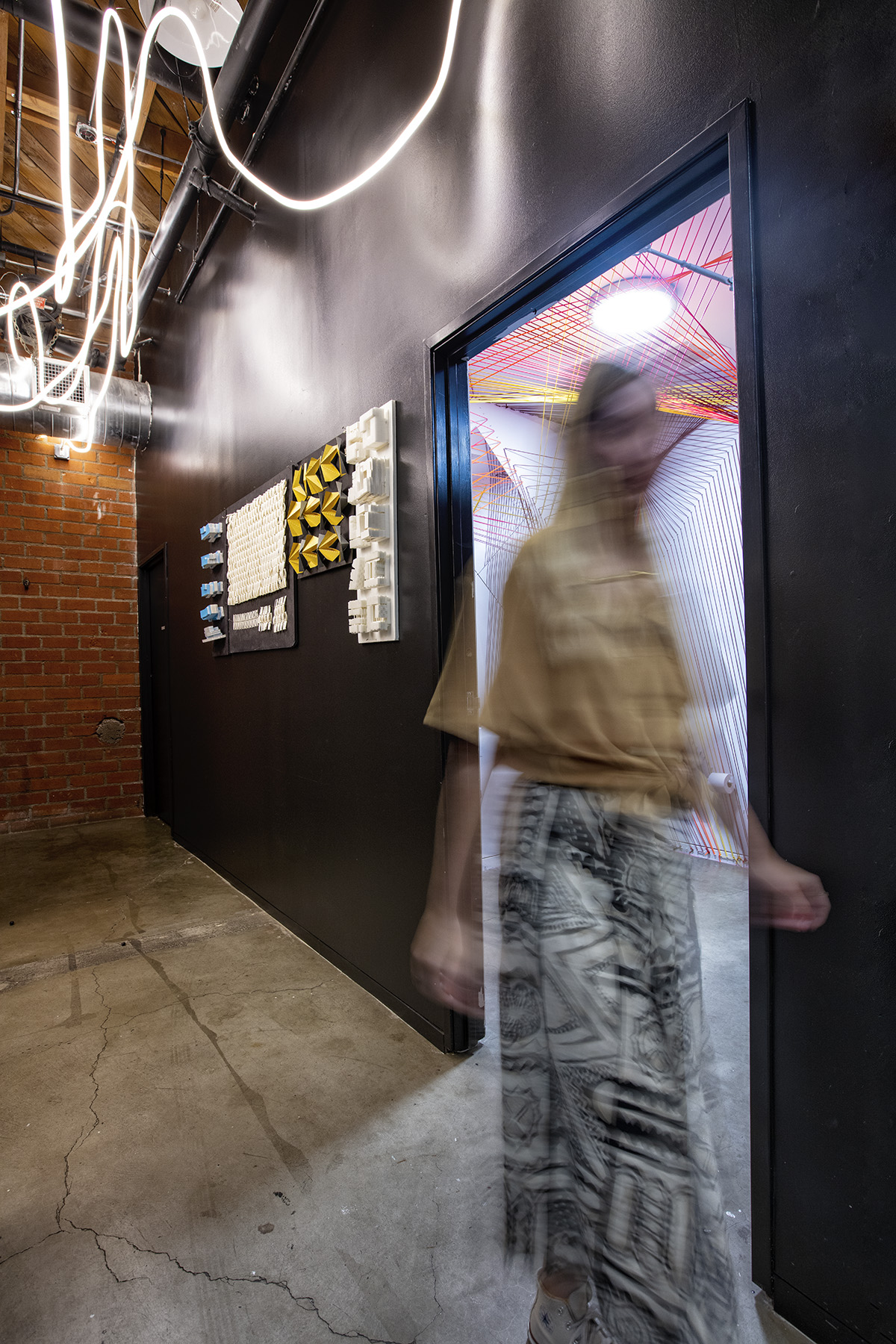 Being an innovative, young and energetic design and architecture firm, OFFICEUNTITLED focuses on creative solutions across all their projects with collaboration and teamwork at the forefront. Recently, they applied their hands-on research-driven design approach to what the future of work will look like post-COVID. They have gradually transformed their existing office space to test out various options for an initially socially distanced workplace with a prime focus on enabling collaborative team work to maximize the time staff members spend together in the office.

While everyone agrees that being in the office allows for better collaboration, OU focused to enhance the in-office experience for its staff. The 5,000-square-foot warehouse-style Culver City office holds up to 50 people. A garage door and five operable skylights open to the outdoors and allow for natural ventilation. The space features two enclosed conference rooms, three open meeting areas, and a sizeable model workshop.

Three months into the pandemic, the team began evaluating their staff’s use of their space as part of an internal research initiative. A five-person core team took a critical look at existing research, how the teams used the space before the onset of the pandemic, and relevant trends. Using their own office as a lab, they began testing out physical arrangements for five office areas: outdoor space, reception, informal gathering areas, kitchen and individual workstations.

Custom furniture design has been a part of OU’s design DNA since its start in 2011. For this project, the team has been investigating more unique and diverse desking types as individual workstation needs have changed with people coming in less often. Finding greater value in ‘homecoming’ over ‘hoteling,’ OU is testing out the idea of two to three people sharing a desk and a pedestal with individual drawers allotted to each user.

The opportunity to rethink and test how we work is important both for ourselves and our clients,” says Christian Robert, OU Co-Founder and Principal. “The main challenge we’re trying to solve is accounting for the ways work will change while maximizing the long-term benefits of getting together.

The previous bench layout rearranges into four L -shaped team areas to work closer together while maintaining an individual workstation for staff to accomplish focus tasks, yet still be able to quickly reach out and get feedback on an idea. The team relied on analog almost as much as digital with a physical space not only playing a role in winning client work, but also allowing staff to see what other teams are working on, spurring the design process forward through casual collisions.

The new star-shaped layout test fit OU has developed allows each team to take over the adjacent wall areas with screens and whiteboards displaying team project relevant content. Each team is in their own quadrant of the ‘X’ and has the chance to partake in a unique workstyle to diversify the space and collect feedback. This layout additionally provides an improved sense of safety with the knowledge that each quadrant will only be shared with 3-4 other people—a smaller scale version of a series of projects that OU and Studio Other designed for BCG Digital Ventures.

The headquarter for BCG-Digital Ventures, an innovation incubator for Boston Consulting Group, is located in Manhattan Beach, CA. Each area of the 55,000-square-foot floor plan is designed for a specific DV team and includes a center workstation room, venture room, center lounge area and a scrum room, designed and intended for collaboration.

With pods and sub-areas more relevant than ever before, “separation now provides the option to come together,” adds Robert.

OU and Studio Other created unique hexagon-shaped conference tables for both the large and small rooms. Each table was designed with mobility and adaptability so that they could fit perfectly into the corners of the hexagon-shaped rooms.

The New Function of the Office

As is expected, the process of reimagining the office and configuration stems from the foundational reality that the purpose of the office has significantly changed. According to Wiederholt, the three new functions of the office are culture, collaboration and training.

“You’re no longer in the routine of going into the office every day because you have to. I go when I know my other coworkers are going to be there because there will be a chance to collaborate or catch up on projects,” says Wiederholt. “You have to come together to understand who your coworkers are, understand their personality, their sense of humor.”

In OU’s case, they’re turning the resimmercial trend on its head, wanting their space to emulate environments that cultivate hospitality, connection, and breaking of bread. While those who meet in the office a couple of days a week partake in two-hour focused times where they work on individual tasks, a greater emphasis has been placed on shared meals in their communal kitchen that bookend the heads-down sessions.

We’ve always wanted our office to look more like a hotel lobby or restaurant rather than an office,” says Robert. “We’ve been continually asking ourselves, ‘What is the value of bringing people together who usually only see each other remotely?’

After a year of remote work, employees’ expectations of their workspace are likely to shift in a dramatic way, with the possibility of increased lounge and informal spaces.

“Now that we’re used to working from home, it’s important to replicate that in the office. You don’t want to have to leave your home to go work in a white sterile box,” says Wiederholt.